Total construction output in Great Britain is forecast to experience a slight decline of 0.3% in 2020, before a rise of 1.2% in 2021 according to the Construction Products Association’s latest Construction Forecasts. Political uncertainty and bad weather led to a slowdown in construction activity towards the end of last year, but the forecasts show little evidence to suggest that the General Election result will benefit the construction industry for the year ahead.

Whilst last year’s general election cleared up Brexit uncertainty for the near-term, certainty beyond the end of the implementation period from January 2021 continues to make large, up-front investments difficult to justify in areas such as prime residential, commercial offices and industrial factories. These high value sectors have seen falls in new orders since the 2016 referendum result, which has now started hitting activity on the ground. With the pipeline of work diminishing, there’s little in the form of new orders to replace projects completing in 2020.

The lack of clarity on the UK’s long term trading relationship with Europe explains why commercial offices and factories output is forecast to fall 4.0% and 10.0% respectively, following two years of decline in both sub-sectors. In addition, falling house prices in the south and softer growth in the north is affecting private house builder appetite to start new developments. Changes to the Help to Buy scheme from April 2021, which include restricting the scheme to first-time buyers and introducing regional price caps, are also expected to shift new builds away from higher value houses towards flats.

Despite an overall decline for construction output, the CPA’s Forecasts also show continued growth rates for the infrastructure sector, with major projects such as Crossrail, HS2, Hinkley Point C and Thames Tideway driving activity. Despite the review into HS2, work is already underway on initial contracts and the forecasts assume it will not stop. Although significant cost savings are likely to be needed on the project, the political importance of infrastructure in the North since the election result should not be underestimated. The construction of higher-value, automated warehouses continues to grow as well largely due to the wider structural shift towards e-commerce. With the associated decline of the high street, mixed-use developments led by a hotel or leisure facility with flats, shops and offices are emerging as a focus for future developments in town centres.

Commenting on the Winter Forecasts, CPA’s Economics Director, Noble Francis, said: “Construction activity has tailed off since last Summer with persistent rain affecting external construction. The main issue, however, was uncertainty, which hindered decision making, the signing of new contracts and new project starts on site.

“Looking at the year ahead, growth prospects for construction are fragile. Whilst the short-term certainty provided by a majority in the General Election does mean that day-to-day consumer spending will continue and a few more projects are likely to go ahead, further political and economic uncertainty beyond 31 December remains problematic for investment and activity. This is a particular issue in high value sectors such prime residential, office towers and factories, which require certainty to justify investment and where new contracts often take 12-18 months to feed into activity down on the ground.

“Prospects remain bright in areas such as warehouses and infrastructure. As ever though, government delivery of major infrastructure projects will be key to the fortunes of both the sector and the industry. Without this certainty, infrastructure activity is expected to remain flat and total construction output would be expected to fall by 0.9% this year.”

The Construction Products Association represents the UK’s manufacturers and distributors of construction products and materials. We are committed to raising the profile of our industry and members’ businesses, helping grow the market and reducing regulatory risk. The sector directly provides jobs for 373,000 people across 24,000 companies and has an annual turnover of more than £61.2 billion. The CPA is the leading voice to promote and campaign for this vital UK industry. 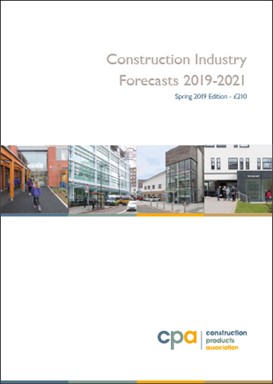 The CPA joined other major trade bodies calling on The Home Secretary to work with industry in designing a new immigration system to encourage growth across the UK.

The Construction Products Association’s State of Trade Survey for 2019 Q4 reports that 43% of heavy side manufacturers each reported a rise or fall in sales compared to Q3. Heavy side products are typically used in the early, structural stages of construction. Sales of light side products, typically used in the later stages of building, were reported to have either increased or decreased by 36% of manufacturers.