The final quarter of last year proved to be a mixed performance for the construction products manufacturing sector, with an equal proportion of manufacturers reporting an increase or decrease in sales for both heavy side and light side products.

The Construction Products Association’s State of Trade Survey for 2019 Q4 reports that 43% of heavy side manufacturers each reported a rise or fall in sales compared to Q3. Heavy side products are typically used in the early, structural stages of construction. Sales of light side products, typically used in the later stages of building, were reported to have either increased or decreased by 36% of manufacturers.

Manufacturers retain a positive, yet cautious view for the next 12 months that will encompass the UK leaving the EU and negotiating trade agreements during the transition period to the end of December. On balance, 21% of heavy side firms and 29% of light side firms anticipated a rise in sales for the year ahead. This was combined with the majority of product manufacturers anticipating that headcount would remain unchanged over the same period.

Rebecca Larkin, CPA Senior Economist said: “The Q4 survey results provide a clear illustration of the varying levels of activity across sectors of construction and regions of the country. Those manufacturers reporting decreases in sales are likely to be feeding into private new house building and RM&I, where activity has slowed as buyers and homeowners pause to take stock of the economic situation and their personal finances. In contrast, manufacturers whose products are used in warehouses, infrastructure or hotels will be buoyed by a pipeline of projects. Nevertheless, the high proportion of manufacturers citing demand as their key concern for 2020 and signs of a pause in hiring suggest that the cloud of uncertainty is yet to clear.”

The Construction Products Association represents the UK’s manufacturers and distributors of construction products and materials. We are committed to raising the profile of our industry and members’ businesses, helping grow the market and reducing regulatory risk. The sector directly provides jobs for 373,000 people across 24,000 companies and has an annual turnover of more than £61.2 billion. The CPA is the leading voice to promote and campaign for this vital UK industry. 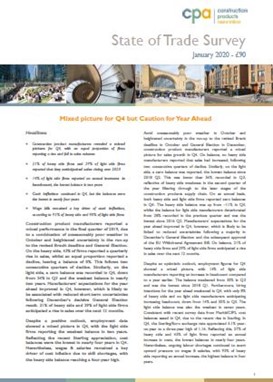 Total construction output in Great Britain is forecast to experience a slight decline of 0.3% in 2020, before a rise of 1.2% in 2021 according to the Construction Products Association’s latest Construction Forecasts.

The CPA joined other major trade bodies calling on The Home Secretary to work with industry in designing a new immigration system to encourage growth across the UK.