No Construction Growth before 2014 as Spending Cuts Bite

23 April 2012
Construction output is forecast to fall by almost 3% this year, according to the latest forecasts published today by the Construction Products Association, as the cuts to the capital budget announced in the CSR start to have a... 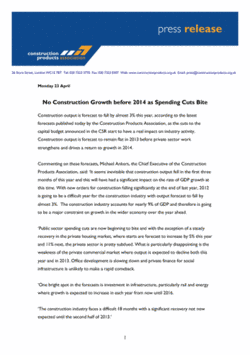 Commenting on these forecasts, Michael Ankers, the Chief Executive of the Construction Products Association, said: ‘It seems inevitable that construction output fell in the first three months of this year and this will have had a significant impact on the rate of GDP growth at this time. With new orders for construction falling significantly at the end of last year, 2012 is going to be a difficult year for the construction industry with output forecast to fall by almost 3%.  The construction industry accounts for nearly 9% of GDP and therefore is going to be a major constraint on growth in the wider economy over the year ahead.

‘Public sector spending cuts are now beginning to bite and with the exception of a steady recovery in the private housing market, where starts are forecast to increase by 5% this year and 11% next, the private sector is pretty subdued. What is particularly disappointing is the weakness of the private commercial market where output is expected to decline both this year and in 2013. Office development is slowing down and private finance for social infrastructure is unlikely to make a rapid comeback.

‘One bright spot in the forecasts is investment in infrastructure, particularly rail and energy where growth is expected to increase in each year from now until 2016.

‘The construction industry faces a difficult 18 months with a significant recovery not now expected until the second half of 2013.’

Other key findings in the Forecasts include:

Construction Continues to Fall but Some Positive Signs