The construction products manufacturing sector began to feel the impacts of the broader weakness in economic growth and a diminishing pipeline of construction activity in Q3, with heavy side manufacturers reporting a fall in sales and a slowdown in hiring during the quarter.

The Construction Products Association’s State of Trade Survey for 2019 Q3 reports that 3% of heavy side manufacturers, on balance, reported a fall in sales compared to Q2. Sales of light side products, typically used in the later stages of construction, were reported to have increased by a balance of 54% of manufacturers, however.

Looking ahead, manufacturers are signalling a cautious view for the next 12 months that encompass Brexit and the rising likelihood of a general election. 11% of heavy side firms anticipated a fall in sales for the year ahead, which was the survey’s first negative reading in the forward-looking indicator in seven years. This was combined with a subdued picture for hiring in Q3, in addition to expectations that rises in headcount over the next year will be the lowest since 2013.

Rebecca Larkin, CPA Senior Economist said: “Third quarter performance was mixed across heavy side and light side product manufacturers, which serves to illustrate the varying fortunes across construction at the moment. The level of construction work underway is currently relatively high, which is benefiting light side product manufacturers feeding into large-scale city centre regeneration underway, particularly in Birmingham and Manchester. However, the fall in sales and forward-looking indicators for the heavy side, which is typically linked to the early structural elements of a building, highlights the upcoming gap in the pipeline of new construction orders and project starts, notably in the residential and commercial sectors and in southern regions of the country.”

The Construction Products Association represents the UK’s manufacturers and distributors of construction products and materials. We are committed to raising the profile of our industry and members’ businesses, helping grow the market and reducing regulatory risk. The sector directly provides jobs for 337,000 people across 24,000 companies and has an annual turnover of more than £60.2 billion. The CPA is the leading voice to promote and campaign for this vital UK industry. 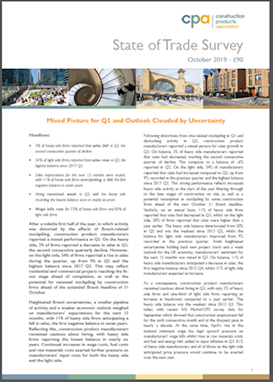 The Construction Products Association’s (CPA) Autumn Forecasts for construction output growth in 2020 and 2021 have been downgraded from 1.0% and 1.4% to 0.5% and 0.9% respectively from its summer forecasts.