Construction Ended 2018 with a Mixed Performance

The construction industry experienced a mixed quarter for sales, output and new orders in the final three months of 2018, according to a quarterly survey of the supply chain’s product manufacturers, contractors, civil engineers and SME builders by the Construction Products Association.

The construction industry experienced a mixed quarter for sales, output and new orders in the final three months of 2018, according to a quarterly survey of the supply chain’s product manufacturers, contractors, civil engineers and SME builders by the Construction Products Association.

Commenting on the survey, Rebecca Larkin, Senior Economist at the CPA, said: "Parts of the construction supply chain have clearly started to feel the effects of the falls in new orders since the EU referendum translating into reduced activity in sectors such as high-end residential, commercial offices and industrial factories. The uncertainty that precludes investment decisions in these sectors with a high upfront outlay may also be benefiting other areas of the supply chain. Product manufacturers’ optimism looking towards 2019 may be reflective of continued high levels of activity in buoyant regions outside of the South East, as well as an element of precautionary stockpiling on-site providing a near-term sales uplift."

Brian Berry, Chief Executive of the Federation of Master Builders, said: "Workloads for small construction firms continued to rise in the last quarter of 2018 but after 23 consecutive quarters of growth, these latest results could mark a tipping point. Mounting Brexit uncertainty is starting to have a tangible effect and the indicators are not good with almost half of builders reporting signs of a weakening housing market. Furthermore, a worrying one in five construction SMEs has had projects stalled in the past three months due to delays to loans, or loan refusals, from the banks. Together with ever-rising costs due to material price hikes and labour shortages, the headwinds are blowing in the wrong direction for the UK construction sector."

Commenting, Build UK Policy Manager, David Bishop said: "The latest State of Trade result highlights a difficult Q4 with half of main contractors and a quarter of specialists reporting a decrease in output compared to this time last year. Furthermore the lack of required skills remains a concern along with the ongoing uncertainty caused by Brexit. Build UK has worked with other industry bodies, including all those involved in proceeding the State of Trade, to collate a report which identifies occupations that are experiencing, or may experience, shortages of available staff in the UK construction sector. This has been shared with industry and government." 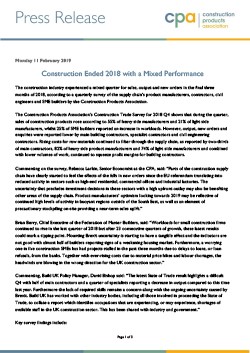 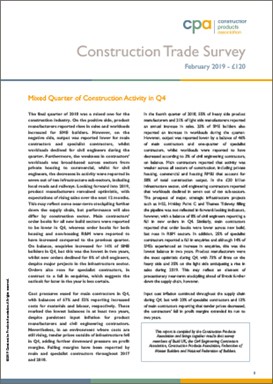 Avoiding a ‘No Deal’ Brexit for the Construction Industry