The Construction Products Association’s State of Trade Survey for 2018 Q2 shows that the £56 billion UK construction products manufacturing industry began its catch-up of activity lost to adverse weather conditions during the first three months of the year.

The Construction Products Association’s State of Trade Survey for 2018 Q2 shows that the £56 billion UK construction products manufacturing industry began its catch-up of activity lost to adverse weather conditions during the first three months of the year.

Construction product sales act as an early indicator of wider activity in the supply chain and these results signpost to a rise in total construction output levels over the next 12 months.

Heavy side manufacturers reported an increase in activity, with sales in Q2 rising for 40% of firms, following two previous quarters of falling sales. For light side manufacturers,  29% of firms on balance reported a decrease, which was the weakest performance since 2012 Q3. This reflects the lagged impact of the industry’s decline in Q1, as light side products such as insulation, boilers, glass and lighting tend to be used at the end of the building process.

Manufacturers anticipate a return to growth in the coming quarters, with 43% of heavy side firms and 27% of those on the light side expecting an increase in sales over the next 12 months. Input cost inflation continues to persist, however, particularly for the energy-intensive heavy side, which is experiencing the pass-through of rising global commodity prices on fuel and energy costs.

Rebecca Larkin, CPA Senior Economist said: “These results fit the profile of construction catch-up from a weather-affected Q1. As we’ve moved from a freezing Spring to a hot Summer, groundworks and work on external structures has been able to resume, and this has been reflected in increased sales for heavy side manufacturers. The disruption in Q1 is likely to have delayed interiors and finishing works starting on site which is evident in the decline in light side sales during Q2.

“Manufacturers’ product sales, capacity utilisation and new hiring are all still expected to increase over the next year, but price pressure is coming from all directions across fuel, energy, raw materials and labour, which is likely to be felt throughout the construction supply chain.” 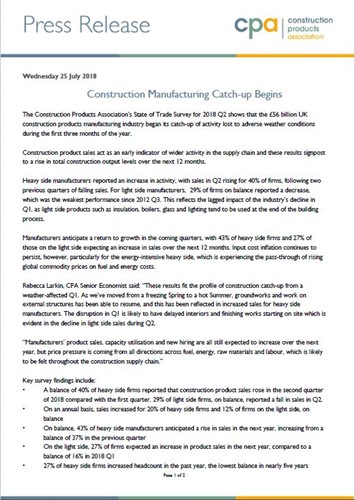 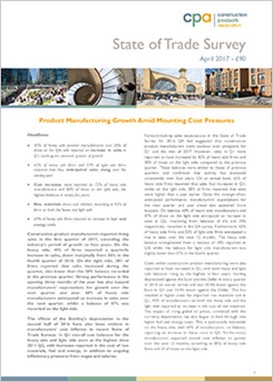