The proportion of companies in the construction supply chain struggling with rising costs for raw materials, labour and energy has remained elevated in each quarter in 2017 according to the Construction Products Association’s Construction Trade Survey for 2017 Q4

The proportion of companies in the construction supply chain struggling with rising costs for raw materials, labour and energy has remained elevated in each quarter in 2017 according to the Construction Products Association's Construction Trade Survey for 2017 Q4.

The survey found that although activity continued to increase for main contractors, SME builders, product manufacturers and specialist contractors during the quarter, civil engineering firms reported the first fall in workloads in four years. Net balances for orders, enquiries and expected product sales for the year ahead weakened, and contractors reported lower orders in the commercial, infrastructure, industrial and public non-housing sectors. Combined, these sectors account for over 40% of total construction output.

Rises in fuel and energy costs were prevalent among heavy side product manufacturers, reflecting the lagged impact of Sterling's depreciation during 2016 on hedged commodity prices. This, in combination with existing price pressures for raw materials and labour, has intensified the cost inflation passing through the supply chain. Overall, costs were reported higher for 82% of civil engineering contractors, whilst raw materials increased for 82% of main contractors and 91% of light side product manufacturers.

Commenting on the survey, Rebecca Larkin, Senior Economist at the CPA, said: "The Q4 survey marked the fourth consecutive quarter of falling profit margins among building contractors. This combined with Carillion's liquidation at the start of this year, only emphasises the financial strains exerted by a protracted period of rising costs passing through the supply chain. Falls in new orders reported in the four sizeable sectors of commercial, infrastructure, industrial and public non-housing add another downside to the outlook for 2018 given the early signs of slowing activity at the end of last year."

Brian Berry, Chief Executive of the Federation of Master Builders (FMB), said: "Smaller building firms in the construction sector fared well in the final three months of last year. The latest figures demonstrate an underlying resilience in the industry with many firms reporting increased workloads and an increase in enquiries. However, now is no time for complacency as growth among construction SMEs is slowing. Firms have reported record highs in terms of problems hiring skilled trades such as bricklayers, carpenters and plasterers. With Brexit just around the corner, this problem could well be exacerbated if our access to skilled EU workers is diminished. What's more, the acute skills gap has caused salaries to spike and material prices remain high. Together these factors are squeezing margins for smaller builders."

CECA Director of External Affairs, Marie-Claude Hemming, said: "These disappointing figures show that more must be done to unlock planned infrastructure investment and bring schemes to market. CECA calls on Government to do more, by committing to projects outlined in the National Infrastructure Delivery Plan, and to continue to develop projects to add to this pipeline to secure the future of the UK economy. Our hopes are that the decline in workloads during 2017 Q4 is representative of a pause in activity, rather than a sign of broader decline." 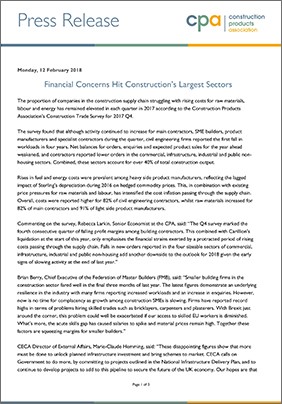 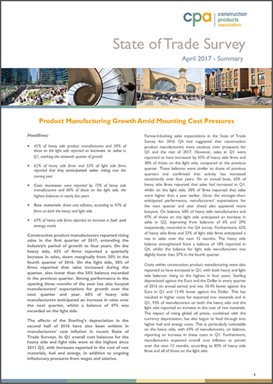 Construction output to remain flat - at best - in 2018

Construction output to remain flat - at best - in 2018