The ONS today published its preliminary estimate for GDP in the first quarter of 2018. The release shows that the economy grew by just 0.1%, down from 0.4% in 2016 Q4 and its slowest growth since 2012 Q4. Construction activity is estimated to have fallen 3.3% over the period, compared to growth of 0.7% for industrial production and 0.3% for the services sector. The preliminary estimate incorporates 45% of total data for the quarter and will be subject to revisions.

Rebecca Larkin, Senior Economist at the Construction Products Association, commented: “This preliminary estimate gives the first full indication of how construction was affected by the liquidation of Carillion in January and the adverse weather at the end of February and beginning of March. The quarterly decline of 3.3% was the worst since 2012 Q2 and implies a £1.3 billion loss of output in the opening months of 2018.

“Some degree of catch-up is expected throughout Spring and Summer, but on the CPA’s forecasts, amid continued economic uncertainty and weakness in commercial construction, output for the year is still expected to be flat at best.” 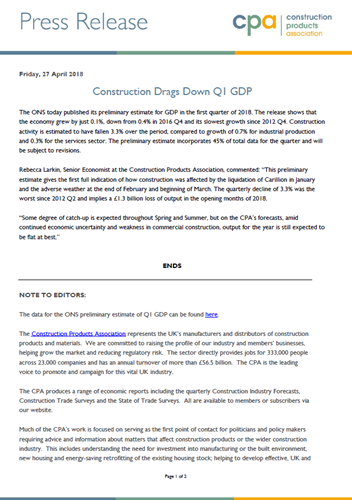 Construction Output Forecast to Flatline in 2018

Construction Output Forecast to Flatline in 2018