The CPA’s latest forecasts highlight a mixed picture for the construction industry over the next two years due to the impacts of the uncertainty following the EU referendum. Overall, construction activity is expected to remain broadly flat in 2017 and 2018, but this masks a more nuanced picture at the sector level with growth in infrastructure and education offsetting falls in activity in sectors such as commercial offices and industrial factories.

Noble Francis, Economics Director, said: “Surveys across the industry highlight that activity in the construction sector has been sustained post-referendum, primarily based upon work on projects that were signed in the 12-18 months before the referendum. Looking forward, projects in the pipeline mean that construction activity is likely to continue throughout the rest of 2016 and the first half of 2017.

“From the second half of 2017, however, there is likely to be a clear division between the fortunes of privately-funded construction sectors – such as commercial offices and industrial factories – where the current uncertainty is likely to have a major impact, and those that are largely unaffected by post-referendum uncertainty – such as infrastructure and education – which are either publicly-funded or in regulated sectors.

“In construction sectors that are likely to be affected by the uncertainty, new investment has already fallen sharply but the lag between new contract awards and activity on the ground means that the weakening in sector output is likely to occur from the second half of next year. Commercial offices output is expected to decline 3.0% in 2017 and a further 10.0% in 2018. In the industrial factories sector, construction is expected to fall 11.6% between 2015 and 2018 as renewal and refurbishment of existing factories continues but large manufacturers make fewer new major investments.

“Within sectors that are expected to be largely unaffected by uncertainty, infrastructure will be a key driver of construction activity. Major projects such as HS2, Hinkley Point C nuclear power station and the Thames Tideway Tunnel are anticipated to provide growth of 6.2% in 2017 and 10.2% in 2018. Within education construction, activity is expected to rise 5.8% by 2018 due to public sector capital investment in the Priority School Building Programme and private sector investment in universities, including £1 billion programmes at Manchester, Cambridge and Glasgow.

“Outside of these sectors, private house building has not been affected by the uncertainty so far and is expected to rise by 2.0% in 2016. It is anticipated to remain flat in 2017 before a 2.0% fall in 2018 due to slower demand as UK economic growth and real wage growth both weaken considerably next year. However, private house building could be boosted by new measures in the government’s Autumn Statement on 23 November. The slower real wage growth in 2017, driven by higher inflation due to the recent falls in Sterling, is also expected to lead to a decline in retail construction of 4.0% in 2017 and 2.0% in 2018. This in a sector already hit by the shift away from traditional retail towards online shopping.“With an upcoming Autumn Statement, it is vital that the Chancellor focuses on reducing uncertainty for the private sector, sustaining the housing sector and ensuring delivery of education construction and major infrastructure projects already in the pipeline.”

NOTE TO EDITORS:
The Construction Products Association represents the UK’s manufacturers and distributors of construction products and materials. We are committed to raising the profile of our industry and members’ businesses, helping grow the market and reducing regulatory risk. The sector directly provides jobs for 313,000 people across 21,000 companies and has an annual turnover of more than £50 billion. The CPA is the leading voice to promote and campaign for this vital UK industry. 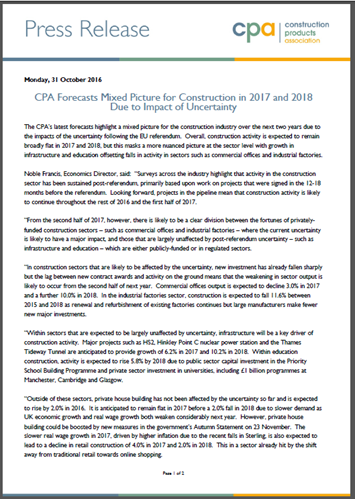