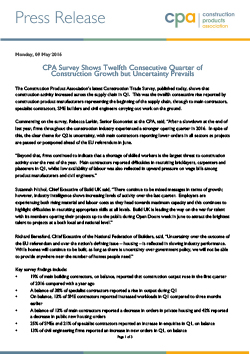 Commenting on the survey, Rebecca Larkin, Senior Economist at the CPA, said, “After a slowdown at the end of last year, firms throughout the construction industry experienced a stronger opening quarter in 2016. In spite of this, the clear theme for Q2 is uncertainty, with main contractors reporting lower orders in all sectors as projects are paused or postponed ahead of the EU referendum in June.

“Beyond that, firms continued to indicate that a shortage of skilled workers is the largest threat to construction activity over the rest of the year. Main contractors reported difficulties in recruiting bricklayers, carpenters and plasterers in Q1, whilst low availability of labour was also reflected in upward pressure on wage bills among product manufacturers and civil engineers.”

Suzannah Nichol, Chief Executive of Build UK said, “There continue to be mixed messages in terms of growth; however, industry intelligence shows increasing levels of activity over the last quarter. Employers are experiencing both rising material and labour costs as they head towards maximum capacity and this continues to highlight difficulties in recruiting appropriate skills at all levels. Build UK is leading the way on the war for talent with its members opening their projects up to the public during Open Doors week in June to attract the brightest talent to projects at a both local and national level.”

Richard Beresford, Chief Executive of the National Federation of Builders, said, “Uncertainty over the outcome of the EU referendum and over the nation’s defining issue – housing – is reflected in slowing industry performance. While homes will continue to be built, as long as there is uncertainty over government policy, we will not be able to provide anywhere near the number of homes people need.”

The FMB is a source of knowledge, professional advice and support for its members, providing a range of modern and relevant business building services to save them time and money. The FMB also offers advice to consumers via its “Find a Builder” service. Within its membership, around 38% of FMB members engage in house building either as their primary function or as part of the suite of building services they provide, but most are primarily active in the domestic RM&I market.

The Construction Product Association’s latest State of Trade Survey reports a positive performance in sales of construction products in the first quarter of 2016. Sales increased for a twelfth consecutive quarter, but manufacturers’ optimism is showing signs of sliding due to uncertainty surrounding the EU referendum in June.

Rebecca Larkin, CPA Senior Economist, said:  “It is encouraging that after a couple of quarters of muted activity, heavy side manufacturers reported stronger sales growth in Q1.  Light side manufacturers opened 2016 a little weaker, but this is likely to be a hangover as the slowdown reported by the heavy side at the end of last year filters through to light side activity – typically towards the end of the building process.

“Manufacturers’ optimism for Q2 and for the next 12 months has been dented by uncertainty in the run-up to the EU referendum in June.  On balance, 38% of heavy side firms and 29% of those on the light side anticipate a rise in sales in Q2.  These balances mark the lowest sentiment in three years and signpost a slowdown in growth as we approach the vote.

“One favourable side effect of the referendum uncertainty has been the depreciation in Sterling, which has resulted in increased exports for product manufacturers.  On the heavy side, 71% of manufacturers anticipate an increase in export sales over the year, a view shared by 60% of light side firms.  This will provide a welcome fillip if domestic demand pauses as manufacturers expect.”

The Construction Products Association represents the UK’s manufacturers and distributors of construction products and materials.  The sector directly provides jobs for 313,000 people across 21,000 companies and has an annual turnover of more than £50 billion.  The CPA is the leading voice to promote and campaign for this vital UK industry.