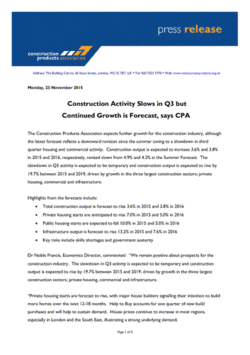 The Construction Products Association expects further growth for the construction industry, although the latest forecast reflects a downward revision since the summer owing to a slowdown in third quarter housing and commercial activity.

Highlights from the forecasts include:

Dr Noble Francis, Economics Director, commented:  “We remain positive about prospects for the construction industry.  The slowdown in Q3 activity is expected to be temporary and construction output is expected to rise by 19.7% between 2015 and 2019, driven by growth in the three largest construction sectors; private housing, commercial and infrastructure.

“Private housing starts are forecast to rise, with major house builders signalling their intention to build more homes over the next 12-18 months.  Help to Buy accounts for one quarter of new build purchases and will help to sustain demand.  House prices continue to increase in most regions, especially in London and the South East, illustrating a strong underlying demand.

“Public housing, however, is expected to be adversely affected by uncertainty and a lack of funding due to the extension of Right to Buy to housing associations and cuts to social rent.  As a result, public housing starts are estimated to fall 10.0% in 2015 and a further 5.0% in 2016.”

Dr Francis continued:  “The commercial sector is forecast to enjoy growth from 2016 averaging 3.9% per year through to 2019.  New offices construction is expected to be the primary driver of this growth, with increasing activity in cities such as Birmingham and Manchester as well as growth in the capital.  Retail construction is expected to improve but a consolidation of expansion plans by major supermarket chains will constrain growth rates.

“Infrastructure activity continues to thrive.  Output in the sector is forecast to grow 11.2% on average per year between 2015 and 2019, supported in large part by the £411 billion National Infrastructure Plan.  The roads and energy sub-sectors will be strongest but work is forecast to increase throughout the forecast period in all key sub-sectors; roads, energy, rail, water and sewerage.

“Whilst growth prospects in construction remain positive, there are significant risks.  Government austerity focuses on current spending rather than capital investment but the risk remains that if government cannot reduce current spending as much as it anticipates, it may cut public construction projects to achieve its aims of eliminating the public sector deficit.  In addition, within the construction industry, the key concerns regard skills shortages, which have already been reported in the housing sector but may become more prevalent across the wider industry over the next 12-18 months due to the forecast growth.”

The Construction Products Association represents the UK’s manufacturers and distributors of construction products and materials.  The sector directly provides jobs for 313,000 people across 21,000 companies, and has an annual turnover of more than £50 billion.  The Association acts as the leading voice to promote and campaign for this vital UK industry.