08 March 2013
The latest figures from ONS published today show that construction output fell sharply in January, with falls across almost every sector of the £100 billion industry. 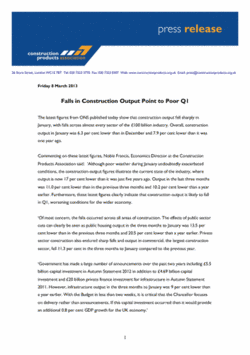 Commenting on these latest figures, Noble Francis, Economics Director at the Construction Products Association said:  ‘Although poor weather during January undoubtedly exacerbated conditions, the construction output figures illustrate the current state of the industry, where output is now 17 per cent lower than it was just five years ago. Output in the last three months was 11.0 per cent lower than in the previous three months and 10.2 per cent lower than a year earlier. Furthermore, these latest figures clearly indicate that construction output is likely to fall in Q1, worsening conditions for the wider economy.

‘Government has made a large number of announcements over the past two years including £5.5 billion capital investment in Autumn Statement 2012 in addition to £4.69 billion capital investment and £20 billion private finance investment for infrastructure in Autumn Statement 2011. However, infrastructure output in the three months to January was 9 per cent lower than a year earlier. With the Budget in less than two weeks, it is critical that the Chancellor focuses on delivery rather than announcements. If this capital investment occurred then it would provide an additional 0.8 per cent GDP growth for the UK economy.’