12 April 2013
The latest figures from ONS published today indicated a pick up in February as the industry recovered from the poor weather experienced in January. 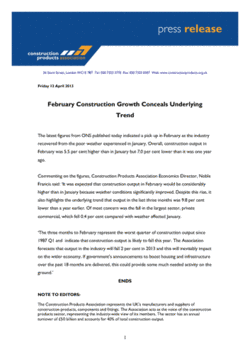 The latest figures from ONS published today indicated a pick up in February as the industry recovered from the poor weather experienced in January. Overall, construction output in February was 5.5 per cent higher than in January but 7.0 per cent lower than it was one year ago.

Commenting on the figures, Construction Products Association Economics Director, Noble Francis said: ‘It was expected that construction output in February would be considerably higher than in January because weather conditions significantly improved. Despite this rise, it also highlights the underlying trend that output in the last three months was 9.8 per cent lower than a year earlier. Of most concern was the fall in the largest sector, private commercial, which fell 0.4 per cent compared with weather affected January.

‘The three months to February represent the worst quarter of construction output since 1987 Q1 and  indicate that construction output is likely to fall this year. The Association forecasts that output in the industry will fall 2 per cent in 2013 and this will inevitably impact on the wider economy. If government’s announcements to boost housing and infrastructure over the past 18 months are delivered, this could provide some much needed activity on the ground.’