04 October 2012
The Government has been called to act after politicians from across the political spectrum expressed doubts about plans to upgrade the country’s infrastructure. 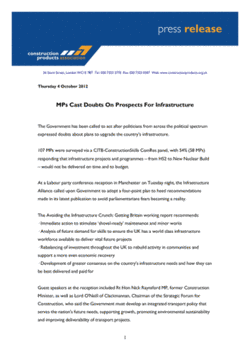 The Government has been called to act after politicians from across the political spectrum expressed doubts about plans to upgrade the country’s infrastructure.

107 MPs were surveyed via a CITB-ConstructionSkills ComRes panel, with 54% (58 MPs) responding that infrastructure projects and programmes – from HS2 to New Nuclear Build – would not be delivered on time and to budget.

At a Labour party conference reception in Manchester on Tuesday night, the Infrastructure Alliance called upon Government to adopt a four-point plan to heed recommendations made in its latest publication to avoid parliamentarians fears becoming a reality.

The Avoiding the Infrastructure Crunch: Getting Britain working report recommends:

He added that it was vital that the UK supply chain had the skills to deliver general infrastructure and transport projects, which are vital for local and national economic growth.

“Too often the choices politicians make about where to invest, simply isn’t informed by a strategic view of the long-term demands on Britain’s infrastructure. I hope we do a bit better than the “can’t see beyond the next election” cliché, as cross-party support on HS2 and our call for bi-partisan talks on airport capacity demonstrate – and at last those calls have been heeded.”

Speaking on behalf of the Infrastructure Alliance, ICE Director General Nick Baveystock said: “Infrastructure has a pivotal part to play in enabling our economic recovery – not only does it drive jobs and growth but it builds the skills we need to compete internationally. The National Infrastructure Plan is in place but to truly to deliver the infrastructure this country needs, we have to take a long term, strategic and genuinely visionary view, taking in the whole of UK.

“Greater political consensus is imperative, not only on the programme of works in the National Infrastructure Plan but on finance and delivery mechanisms, allowing government to drive down risk and make infrastructure an attractive investment - providing industry and investors greater certainty against which to plan. “Concurrently we must take forward ‘shovel ready’ projects such as road maintenance and repairs now with all that means for local jobs and growth”

Judy Lowe, Deputy Chair of CITB-ConstructionSkills, said: “Right now Government is spending £8bn in benefits for 188,000 unemployed construction workers. If they commit instead to investment in shovel-ready projects, these people could be trained-up and working tomorrow.”

The Infrastructure Alliance is currently promoting the document and its recommendations at the three main party conferences. The Alliance held an event at the Liberal Democrat Conference and following the Labour evening reception in Manchester, the Alliance will be hosting a panel discussion and reception at the Conservative Party conference in Birmingham on 7 and 8 October respectively.