15 June 2012
The latest ONS construction figures released today show that construction output in April fell by 13% compared to March and was 9% lower than the same month one year earlier. Furthermore, ONS also revised the contraction in... 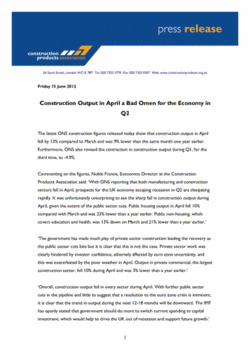 Commenting on the figures, Noble Francis, Economics Director at the Construction Products Association said: ‘With ONS reporting that both manufacturing and construction sectors fell in April, prospects for the UK economy escaping recession in Q2 are dissipating rapidly. It was unfortunately unsurprising to see the sharp fall in construction output during April, given the extent of the public sector cuts. Public housing output in April fell 10% compared with March and was 23% lower than a year earlier. Public non-housing, which covers education and health, was 13% down on March and 21% lower than a year earlier.’

‘The government has made much play of private sector construction leading the recovery as the public sector cuts bite but it is clear that this is not the case. Private sector work was clearly hindered by investor confidence, adversely affected by euro zone uncertainty, and this was exacerbated by the poor weather in April. Output in private commercial, the largest construction sector, fell 10% during April and was 3% lower than a year earlier.’

‘Overall, construction output fell in every sector during April. With further public sector cuts in the pipeline and little to suggest that a resolution to the euro zone crisis is imminent, it is clear that the trend in output during the next 12-18 months will be downward. The IMF has openly stated that government should do more to switch current spending to capital investment, which would help to drive the UK out of recession and support future growth.’