Brexit Strategy: Kicking the Can Down the Road

Much of the general public has switched off from Brexit but for those of us who have had to constantly follow developments (or lack of developments) over the past two and a half years, it’s been a draining experience. Parliamentary votes delayed, pulled and lost. Endless speculation and we’re about to enter March with no greater certainty that we had three, six or nine months ago.

However, we are where we are but where actually are we?

In practice, the options now are still the same as we outlined in our Winter forecasts back in January. However, the likelihood of these options has changed.

The options are that Theresa May’s deal goes through, which is unlikely or a delay to Article 50 that enables an alternative deal or a second referendum, which is more likely. And, if none of these can be agreed then we can end up with ‘No Deal’.

The probabilities in the table are only indicative so I wouldn’t take them too seriously, particularly given the uncertainty at present. We anticipate Theresa May’s deal as only having a 15% chance of getting through. Her strategy for two years has consistently been leave it as late as possible to force Parliament into a situation where it was either her deal or ‘No deal’. However, that only works if MPs believe they are the only those two options and clearly they don’t. Many MPs still believe that delaying Article 50, either for a ‘better’ deal or for a second referendum, is possible. So her threat doesn’t work. Apart from a small minority of hard Brexiteers, the majority of Parliament doesn’t want ‘No Deal’ due to the negative impacts on the UK Economy so that also has a relatively low probability of around 15%. 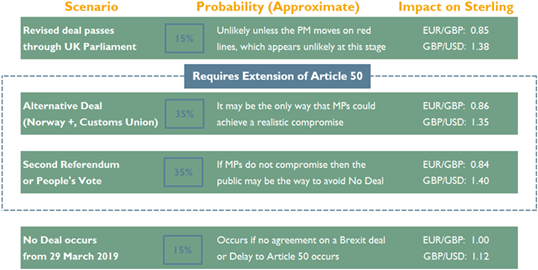 The most likely option is a delay to Article 50, which is what we expected in our Winter forecasts and still expect coming into the Spring forecasts. This would avoid a cliff edge at the end of March but the indications from government are that it would only be a short delay of just three months. This clearly isn’t enough time to find a sensible compromise to a deal that allows firms to plan and invest so it may just be a temporary reprieve.

In terms of process, Parliament has a ‘Meaningful Vote’ on 12th March and either that is approved or, more likely, it is rejected, which means Parliament ends up with a vote on ‘No Deal’ on 13th March. Parliament has a majority against ‘No Deal’ so it suggests that this will be rejected and then MPs have a vote to delay Article 50 on 14th March. It is unlikely, given the previous two votes that this would be rejected so it suggests that Parliament will approve the extension but then this needs to be agreed with the EU and, as the EU would also suffer in a ‘No Deal’ scenario, it is likely that they would approve a delay to Article 50.

However, if we do end up with a three month delay, then what? There isn’t an easy compromise and whilst there isn’t a deal, the uncertainty remains. What do firms that have been stockpiling do? Release the stocks? Keep paying to store them? At the very least, the investment decisions will continue to be delayed and a bounce back in economic growth is only likely in the second half of next year.

It all raises the question of whether we will just be in this situation again in three months’ time even if we do extend Article 50?

Quite frankly, the one constant throughout this process has been kicking the can down the road so realistically we expect more of the same going forward. Either the delay to Article 50 will need to be substantial or if, as expected, it is only three months then it may need to be delayed once again.

Product manufacturers must regain confidence, but industry already has an appetite for change

Active Buildings: The Future of Construction