Construction output and the disruptive factors in Q1

The ONS latest construction output data for Q1 showed that the sector expanded at its weakest pace in six years and confirmed earlier signals from industry surveys such as Markit/CIPS. Construction output declined 2.7% quarter-on-quarter in Q1, following a fall of 0.1% in Q4 and was the largest decline since 2012 Q2. This also marked a second consecutive quarter of decline, which means that the industry technically entered a recession in the first quarter – although, the ONS data often gets revised later on.

Although these figures paint a gloomy picture for the construction industry, this does not come as a surprise, especially given that the first quarter saw the demise of Carillion and adverse weather conditions in late-February and early-March. Carillion was the UK’s second largest contractor, which had the largest presence in infrastructure, particularly in roads and rail, and was a major provider of facilities management services to the public sector. In the immediate aftermath of Carillion’s collapse, cranes were abandoned and workers were absent on several construction sites, halting activity on a number of projects, particularly commercial such as the Midland Metropolitan Hospital in Smethwick and the Royal Liverpool Hospital. However, work continued on facilities management contracts as government and private sector clients reaffirmed their commitments, with a similar stance taken on other joint-venture projects in which Carillion was involved. By contrast, the impact of adverse weather conditions in the first quarter that led to a pause in activity across several UK construction sites, is clearer in the data (see Figure 1). The CPA assumes that the heavy snowfall and freezing temperatures in February and March resulted in a loss of three working days’ worth £1.5 billion – and although anecdotal evidence suggests that this could be higher due to bad weather on other days, recent figures from the ONS showed that construction output in Q1 was £1.1 billion lower than a year ago and fell by £1.0 billion compared to Q4. A closer look at the underlying figures shows that the weakness was widespread across the construction industry, with all sectors except industrial reporting a contraction in Q1. New work fell £652 million in Q1 compared with Q4, with commercial, public non-housing and infrastructure falling by £134 million, £152 million and £124 million respectively. Even private housing output fell £140 million, albeit from a high base in the previous quarter, despite ongoing support from government policies such as Help to Buy.

These figures however are likely to be revised later on as more data becomes available and looking back to 2013, which is when a similar event of this scale occurred, confirms this. Heavy snowfall and unseasonably low temperatures between late-March and early-April 2013 hindered activity on the ground, resulting to £1.6 billion (6.5%) fall in construction output in 2013 Q1 compared with 2012 Q1 and was £0.6 billion (2.4%) lower than in Q4. However, following revisions to the data (see Figure 2), construction output fell 4.9% year-on-year in 2013 Q1, whilst no growth was reported over the quarter. Although this suggests Q1’s growth figures are likely to be revised up in the future, they are still expected to reflect a loss in output. It’s not all doom or gloom however, as there is likely to be some degree of catch-up later this year following the weather disruptions.

While the two major events discussed here were likely to have contributed to the fall in construction activity during the first quarter of this year, macroeconomic factors must have surely played a role too given the weakness in consumer spending and falling real wages in recent months. And last but not least, what about impact of ongoing Brexit-related uncertainties on private construction sectors? Although these factors have not been discussed here in detail, they are likely to pose a risk to sector’s outlook. Nevertheless, as has been the case over the past 12 months, a healthy pipeline of work in both private housing and infrastructure will ensure that the sector continues to expand. 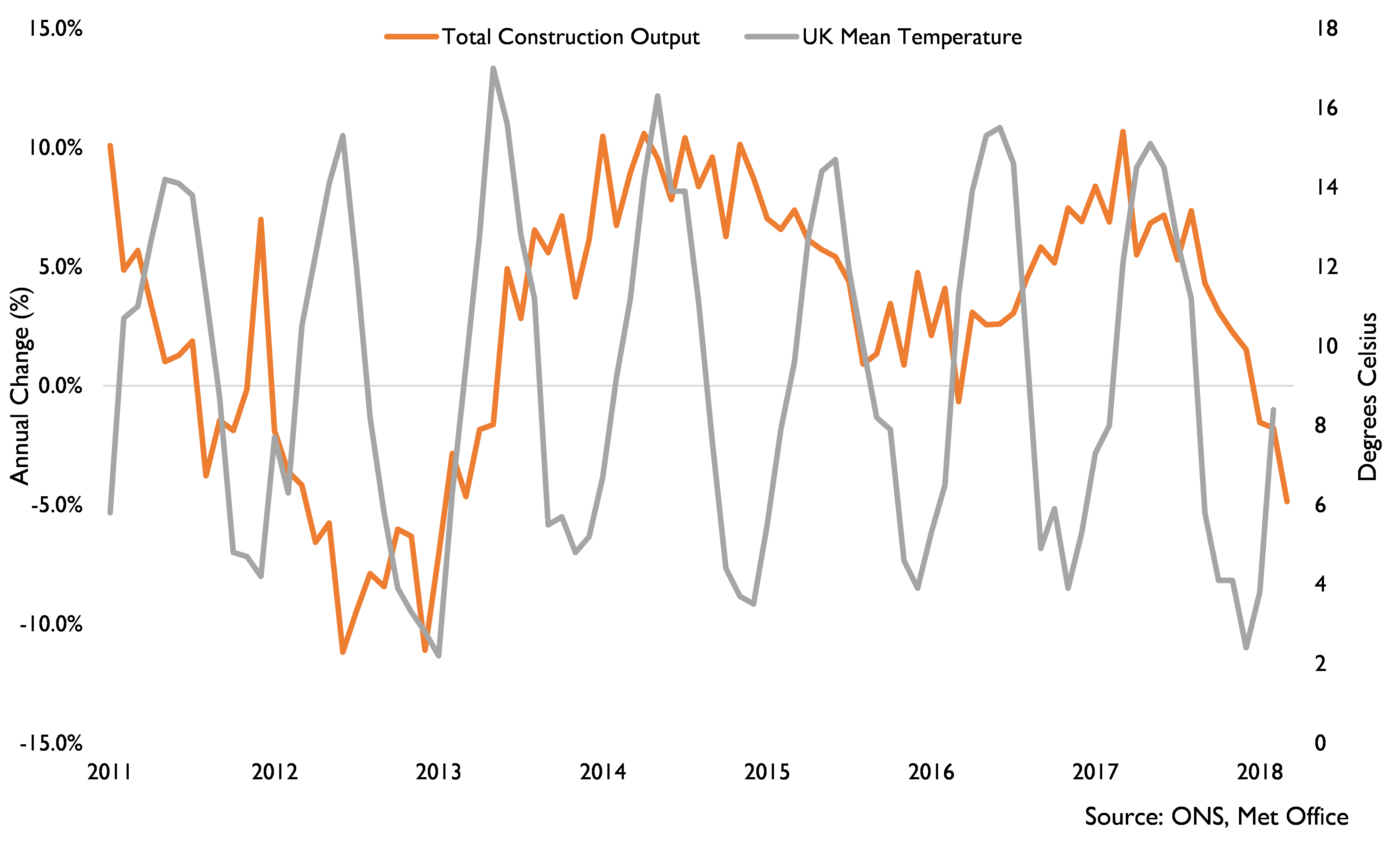 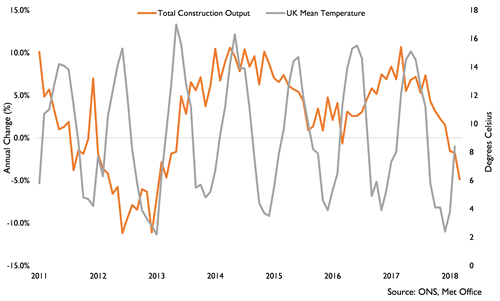 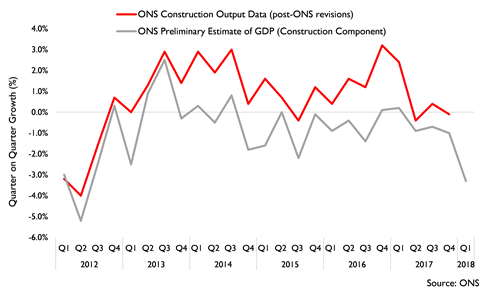