The underlying challenges of the construction industry

Since the nadir in 2009, activity across UK construction has largely remained on an upward trajectory, rising 21.7% from £113.0 billion to £137.6 billion in 2016. Moreover, this was 2.9% higher than its pre-recession peak and output accounted for 6.3% of UK GDP in 2016. Although these figures reflect the continued strength of the industry and its importance in supporting the UK economy, the foundations are weakening, fuelling concerns over deliverability of future construction projects. An ageing workforce that has a direct impact on the availability of skills and a lack of diversity to encourage potential new entrants are some of the key challenges faced by the industry. Indeed, these issues are not a new phenomenon, but how have the age and gender profiles of the construction industry changed in recent years?

According to the 2011 Census data, the highest proportion of workers in construction are aged 40 to 44 years (13.4%), followed by 45 to 49 years (13.3%) and 35 to 39 years (11.1%). Figure 1, which shows the complete age distribution, also illustrates the lack of young workers. The youngest workers, aged between 16 and 19 accounted for 2.7% of the total construction workforce in 2011, whilst 20 to 21 years accounted for 3.0%. Although a similar pattern was exhibited across all other industries, the proportion of workers in construction aged between 40 and 54 was larger on average by 1.7 percentage points. Furthermore, the proportion of construction workers in the age group 60 to 64 years was 7.1% in 2011, compared to a figure of 6.0% registered for all other industries. 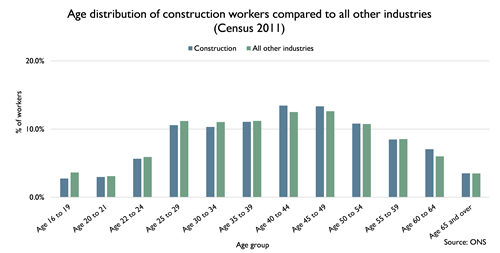 More recent data, which is available by broad age groups shows a similar profile to that seen in the 2011 Census data. In the year to March 2017, the proportion of workers aged between 25 and 49 accounted for 57.9% of total UK construction workforce. The second largest age group, accounting for 32.5%, comprised those aged 50 and over (Figure 2). Unsurprisingly, the youngest workers aged 16 to 19 years accounted for 2.4% and those between 20 to 24 years, accounted for 7.2%. The construction industry, like all other industries is made up middle-aged and older workers but the latest figures suggest that the construction workforce has a slightly larger component of older workers relative to other sectors. 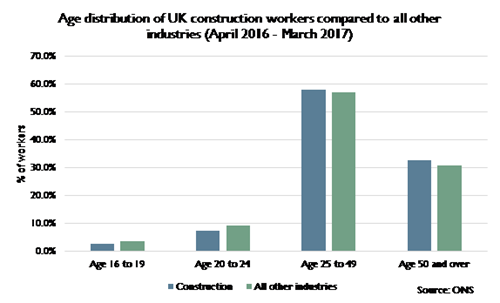 In the 2008/09 recession, the construction industry was severely hit and saw the loss of around 388,000 workers from peak to trough, equivalent to a 15.2% decline. Since 2012, approximately 136,000 jobs were created to reach a total of 2.3 million in 2016 however, this reflects a shortfall of around 252,000 workers compared to its pre-recession peak in 2008. Looking ahead, around 500,000 workers are expected to retire from the industry over the next 10 years, and based on Figure 3, UK-born workers will form the majority leaving the industry. The Construction Industry Training Board (CITB) estimates that we will need approximately 224,000 construction workers over the next five years – although some believe this figure is much larger. According to a report published by Arcadis in February, the UK construction industry will need to recruit over 400,000 people each year until 2021 – equivalent to one person every 77 seconds – in order to successfully deliver housing targets and major infrastructure programmes. This excludes the impact of Brexit, and if taken into account, the consultancy anticipates a further loss of 136,081 EU workers in the case of a ‘soft’ Brexit or 214,542 in the event of a ‘hard’ Brexit by 2020. 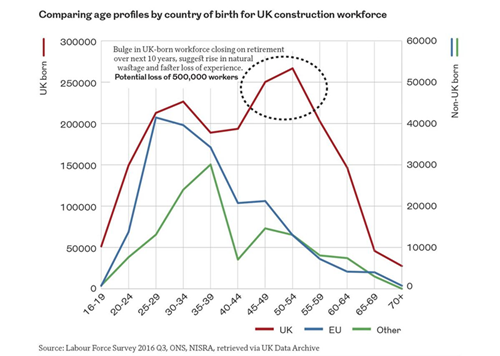 Statistics on employment by gender also show that the construction industry holds true to its stereotypical male-dominated image. In 2016, 87.6% of total construction workers in the UK were men, whilst 12.4% were women, according to the ONS (Figure 4). The data however, includes full-time workers. Historical data shows that men accounted for 87.5% of the total construction workforce in 2007 (women accounted for 12.5%) and, in 1997, this figure was 87.3% (women accounted for 12.7%). This suggests that the gender profile has remained largely unchanged over the past two decades. In terms of the whole economy, although men continue to dominate, the gender profile is less skewed compared to the construction industry. In 2016, 53.2% of the total UK workforce were men, 46.8% were women.

Figure 4: Gender distribution of workers in construction compared with the whole economy (2016)

If we take a look at the distribution of male and female construction workers by major occupational categories however, the presence of female workers in some roles has risen over recent years. In the year to March 2017, 86.4% of administrative and secretarial roles were held by women. Furthermore, in the same period, sales and other service occupations were dominated by women, with 57.5% of jobs held by them. The gender divide inverts when looking at the other construction occupation categories, which are dominated by male workers (Figure 5). In the 12 months to March 2017, the occupational category with the largest proportion of men was skilled trade roles (99.2%), followed by operatives and elementary occupations (97.0%), managers and directors (85.5%) and professional and technical occupations (70.1%). The data illustrates a gender imbalance across the occupational categories, with on-site roles largely occupied by men, whilst women are concentrated around office-based roles. 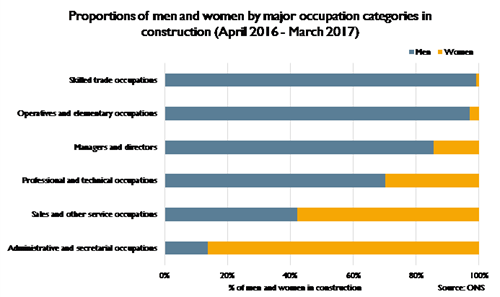 The low levels of gender diversity and an ageing workforce are just two of the labour issues that have beset the construction industry for decades and are likely to be exacerbated further depending on the outcome of Brexit negotiations. Although steps have already been taken to tackle the eroding workforce such as the apprenticeship levy scheme, will this be enough to offset the large proportion of workers expected to retire over the coming decade? Will the UK still be able to import foreign workers to fill in the gaps? Does the solution also partly lie in embracing new digital technologies?

Digitalisation has undoubtedly been the centre of debate in recent years, with off-site manufacturing, Building Information Modelling (BIM) and other new technologies such as drones, 3D printing and robots receiving large interest. The adoption of digital technologies and innovative processes is likely to change the nature of work and, in turn, the profile of the workforce needed – and of course there are pros and cons associated with this, but this remains beyond the scope of the blog. The Digital Build Britain (DBB) strategy highlights that the need for skilled workers such as quantity surveyors and bricklayers will diminish, whilst the demand for people with qualifications in production management, logistics, supply chain management, collaborative systems and data analysis will increase. Although this suggests new roles will be created, largely office-based, concerns remain whether this will be enough to offset the decline in low-skilled workers.

Indeed, there are several questions hanging over the industry and whatever the solution, they are unlikely to be any quick fixes to the industry’s long-running challenges.

How many housing ministers in 20 years?

The CPA's Senior Economist, Rebecca Larkin, asks whether the frequent changes to the position of housing minister is beneficial to the goal of achieving real outcomes on housing policy?

The CPA's Senior Technical Manager, Duncan King, looks at some of the key things to consider when maintaining a good relationship with EU Regulators during Brexit negotiations.